On Tuesday 11th October, Charlie, a recent incomer to the rescue, and in temporary foster whilst her full time foster mum was away, was out walking in Carnkie, Redruth. Suddenly she was spooked by a lorry, and slipped her collar. Charlie is a lurcher, long legged and fast. She had come in to Last Chance a few weeks before; she had been abused, was very nervous of people, painfully thin and deeply traumatised. Her first foster offer had fallen through at the last minute and so she was taken in by Anne-Marie, who gave her love, and started the process of breaking down the barrier of distrust. Anne-Marie had a vacation booked, so Charlie came down to Carnkie whilst she was away. Charlie was settling in nicely with her new foster parents and house-mate. Then everything changed out on that walk.​ 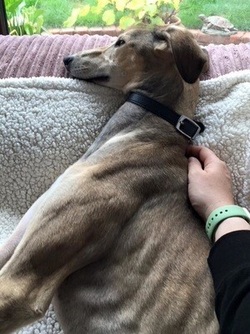 Last Chance Hotel's Facebook page went full alert. Volunteers were called upon to search for her, she could be anywhere in that vast area around Carn Brea. At that point, there were no sightings of her at all, and everyone was sick with worry. Posters went up around the area, asking people to report any sighting of her, but not to try to catch her. Experts in the field gave advice, Last Chance followed that advice to the letter. Two of the team drove to Brighton to pick up a large dog trap, which had been offered on loan by another rescue. Then there were sightings of her, but, more worryingly, some people were trying to catch her themselves, by chasing her in their cars. She was also being fed by someone else, which interfered with the plan of action. She needed to have only one feeding station, to ensure she would come back to that place for sustenance, and then could be lured into the dog trap. At one point, she was seen limping badly, which was extremely worrying. As the days and nights wore on, the LCH team, along with volunteers, would be there on stake outs, from the evening until the early hours of the morning. Charlie was most often seen in the early morning and late evening; she would be lying low during the day. As sightings increased, the team set up a barbecue, to entice her to the all important food station, hoping the smell of freshly cooked meat would bring her closer and get her to take food near the trap. Despite all the information given out on Facebook, and on the posters in the area, well meaning people were still trying to catch her, and in so doing, risking driving her away. The team were at their wits end, through worry and lack of sleep. More and more people came forward to help; the staff of the Countryman pub at Piece and their customers, local residents, and supporters of Last Chance Hotel. Requests went out on Radio Cornwall to report any sightings of her, but to not approach. Anne-Marie returned from her holiday, and drove from her home in Devon to help with the search. Meanwhile the weather had turned colder and wet and Charlie really needed to be lying next to a roaring fire, not alone and frightened in some makeshift den.
Charity Registered in England and Wales 1157684